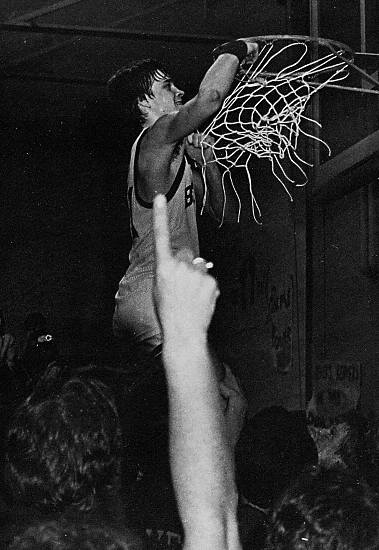 Jeff is recognized as one of the all-time greats on the Beavers hardcourt. An unquestioned leader for the Beavers during his stellar career as a point guard, he scored in double digits 19 times during the 83-84 season, leading the team in scoring in nine contests. He set school records in assists with 11 in 3 different games on his way to becoming Class C first team, and an All-State selection among many other accolades. Upon graduation in 85, Jeff went on to lead the Huskies of Michigan Tech University in a stellar college career, setting assist records that remain yet today.

So three years ago your team was placed in the HOF, what’s it like to be going in on your own?

Old...laughter...but happy to represent the team. It was a great team with a great bunch of players and friends.

You join your dad in the HOF, talk about what it was like for you specifically to play for Roy?

I feel like he was tougher on me then the team purposefully or not, trying to prove that I wasn’t going to get away with things. It was trying on everyone, especially when we’d lose.

You didn’t lose very often did you?

I think we were 59-9 over my three years on varsity, so we didn’t lose many. My son Grant’s teams won 60 and my son Spencer had one or two more than that on varsity for three years. We were 23-3 my senior year. From 7th grade through my varsity years our team only lost 10 total games including going 20-0 for Coach Merkle.

What does it mean to be side by side with your dad Roy, in the HOF?

It’s nice because sports are important to our family and keeps us close together so it’s a nice honor. Still his gym though...laughter...

What were your three most memorable games?

First would have to be a Farwell victory as a junior in Beaverton and we won the conference and that catapulted everything for 84. Winning the regional final in Cheboygan to play at Chrysler Arena was huge and then likely my 40 point game at Standish...try to forget the losses like a district loss in Standish...

The 40 point game came before the three point line didn’t it?

Yes, and my sons often tease me about that.

Which loss hurt the most?

The worst was as a senior losing to Farwell at Farwell in the districts and Roscommon was third in our league and made it to the semifinals that year. We lost by one in O.T. to Farwell.

Who were the best opponents by team and players?

Best teams were Farwell by far...they were good in 84 very similar to us with five guys that were big and strong and could play ball.

Was the league better then?

I don’t think so...there were three or four teams that were good. My senior year we had a lot of blow outs...different schedule in my senior year with Freeland, Pinconning and the like with good players that moved on to a higher level.

What do you remember as your fondest memories of the 83-84 season?

The early season losses behind us and pushing forward. We won a lot of games in a row after a couple of losses...we likely won 19 in a row after that.

You were pretty good in other sports too, what other sport did you play?

Baseball and cross country. But I would shoot buckets at Keith and Donna Wolfe’s while the Arnold boys would run 8 miles for cross country practice and on their way back they’d pick me up to run back to the school. I was the fifth guy just to field a team...they did the rest.

I was first team all-conference my senior year along with dream team midland and Saginaw news dream team. I liked baseball, but my real love was basketball.

Talk about your years at Michigan Technological University.

I played four years as the starting point guard at MTU and left with the all-time steals record that still holds and I graduated! It snows a lot.

Roy is about to break the all time coaching wins record; what about that?

That’s a lot of games and a lot of thanksgiving dinners listening to him and my uncle complain about their teams. He always said he’d quit before my team or after my team finished...we’ll I graduated in 85!

Does the Johnston family talk about anything other than basketball?

Does the Johnston family watch anything on TV other than basketball?

Yes, at my home, we watch a lot of sports and a lot of CSI.

How did sports help you along with the next phase of your life?

What are your earliest memories of Beaverton basketball?

Rebounding for Doyle Dukee, Steve Mishler and Mike O’Brien as their water boy. Mike Garvin too.

Were they your basketball heroes?

Mike O’Brien was my guy. He was the guy that I looked up to. I remember being on the bench in their quarterfinal game. Good memories.

The 1991 girls team is going into the HOF with you; you saw a lot of those games what do you have to say about that team?

I may have kept their scorebook that year or the following year. They were fast and a lot of ball handlers. Great to see them get their recognition.

Other than naming yourself, or your kids, who would you like to have on your Beavers dream team?

I’ll say a word you give me a one word response: 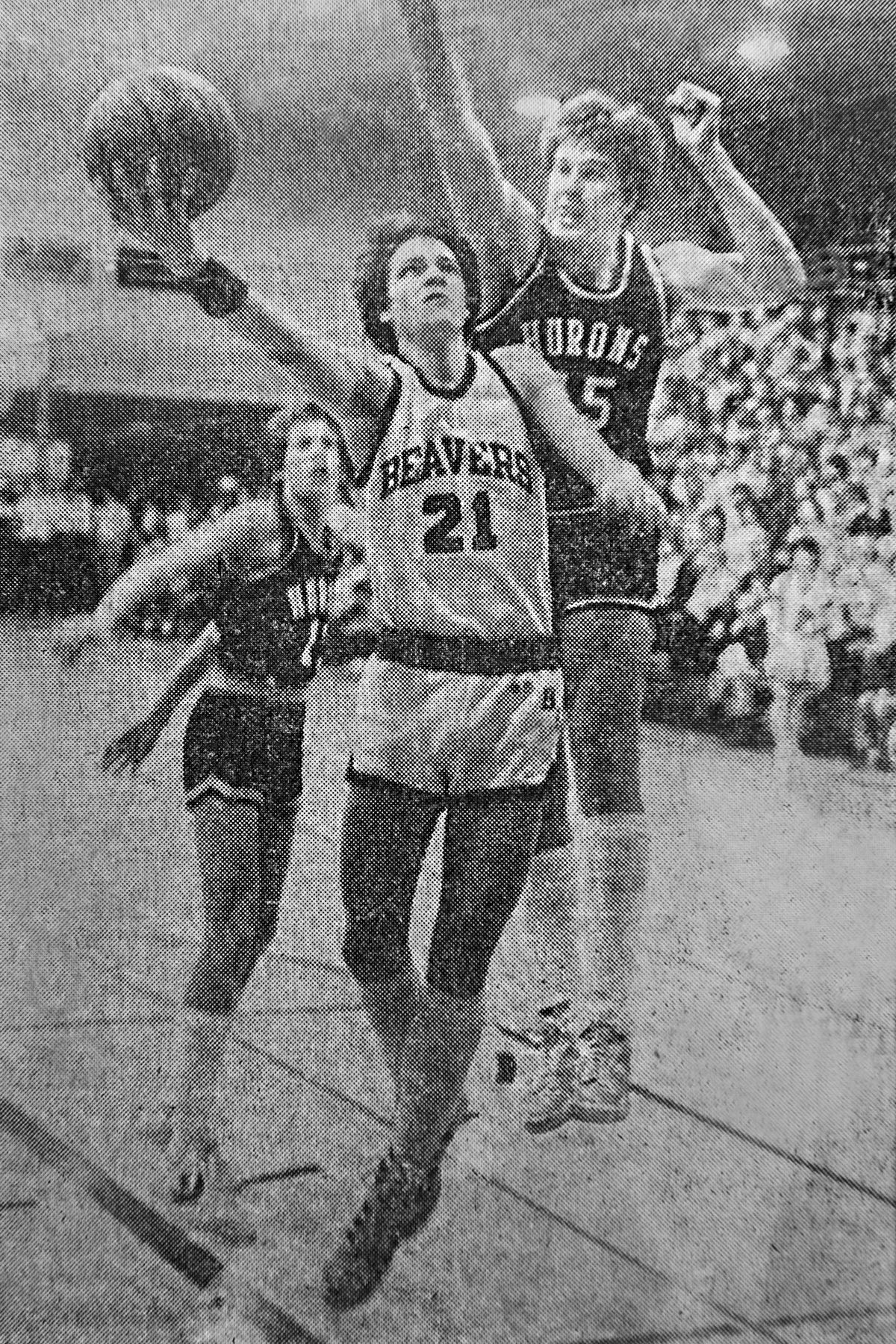 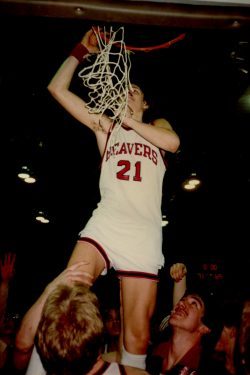 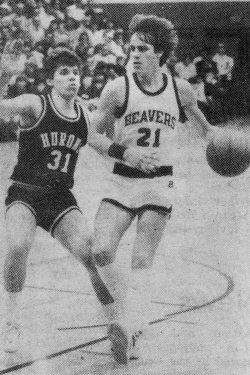 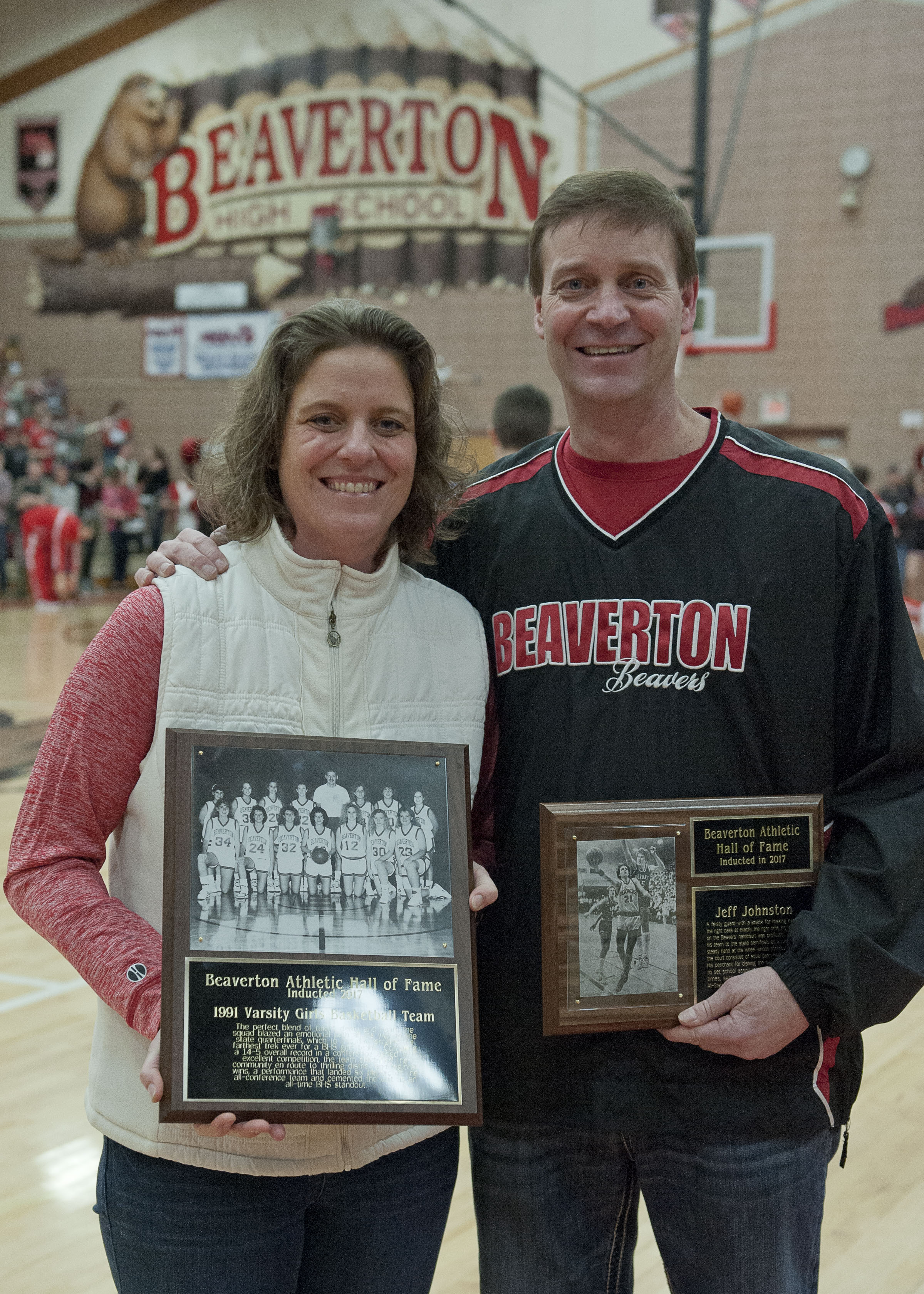 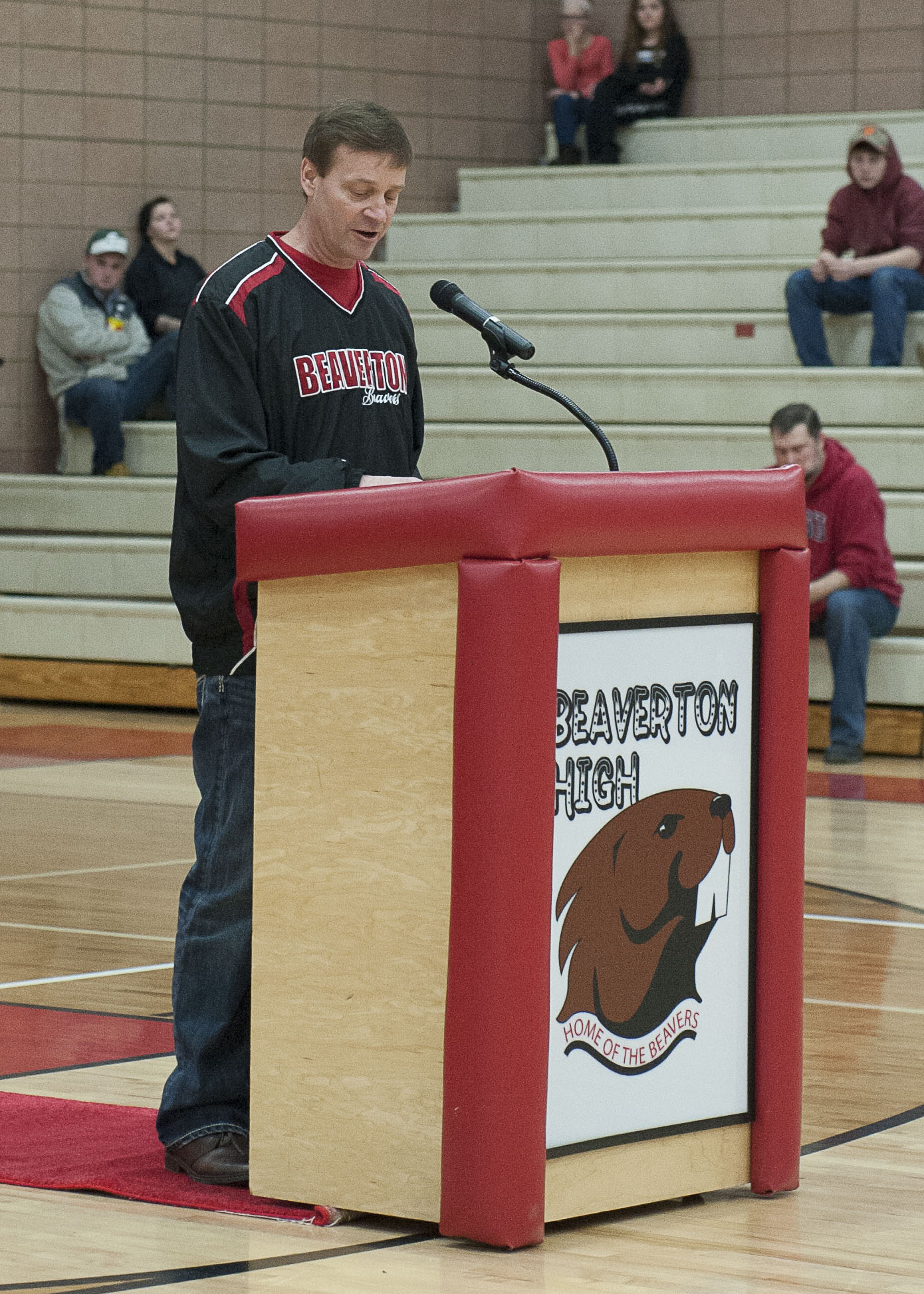 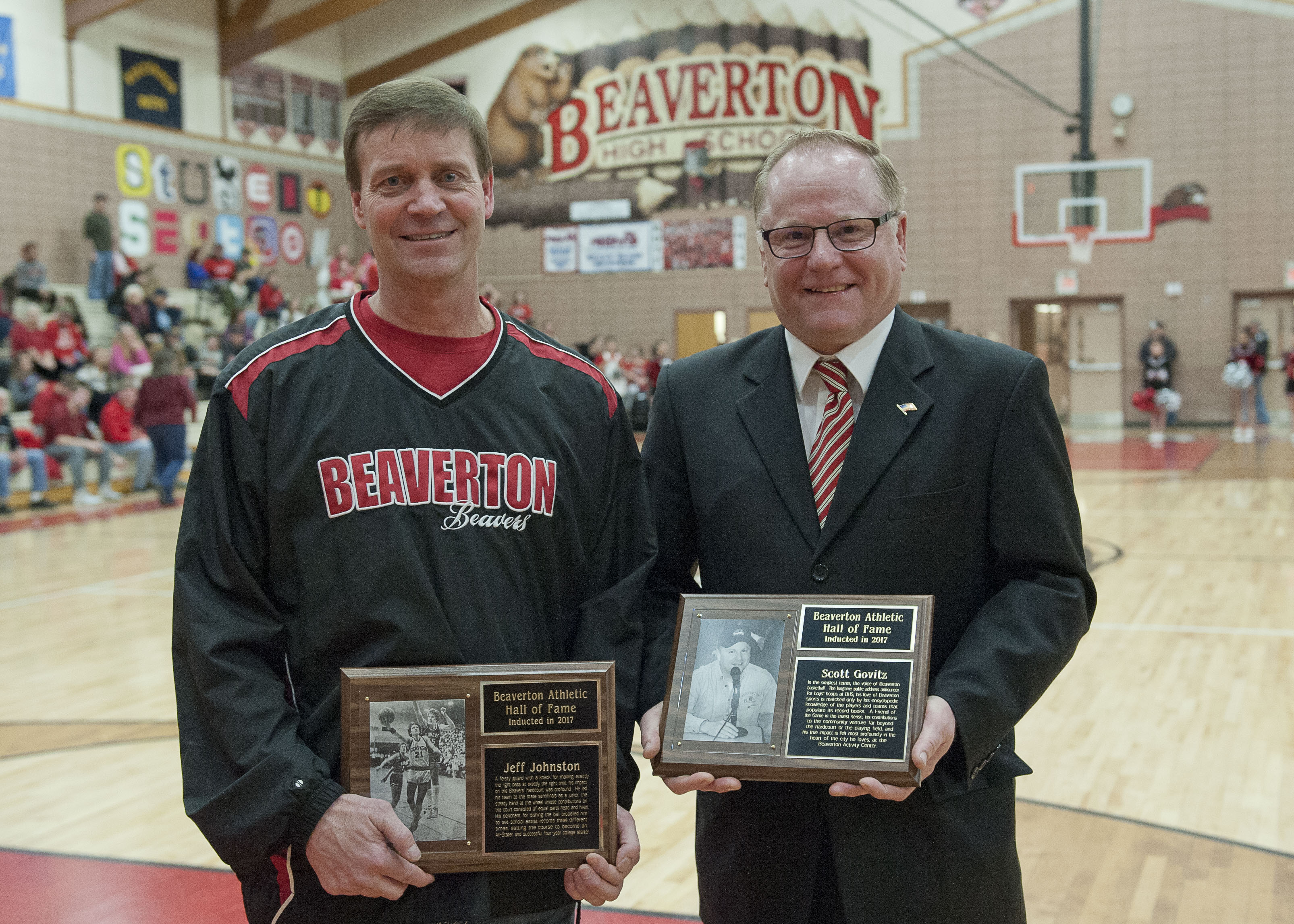 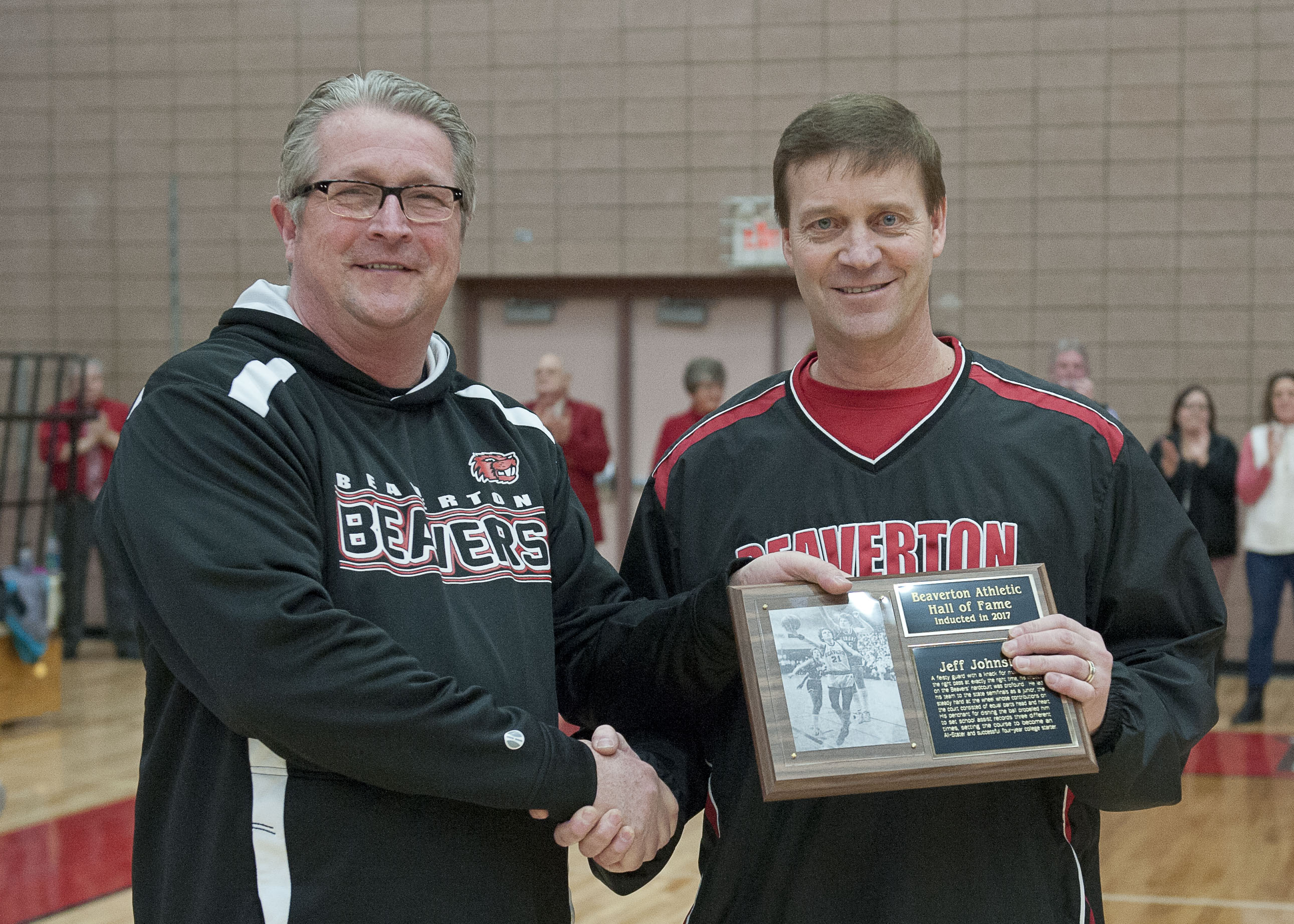 “Jeff made Hartner and Wolfe look like they knew what they were doing on the basketball floor. Anybody who can make those two guys look good should be a first ballot inductee every time. Oh, and as the off guard playing with Jeff, it was a relief having a guy next to me who could dribble, pass, and shoot better than anybody the other team could throw out there. Helped me to focus on my strengths: setting picks and falling down. :)”

“Jeff, congratulations on a well-deserved recognition.”

“Thanks for the hard work and dedication  that made it a thrill for those of us who were fans to watch you lead some of the greatest Beaverton teams to victory and to Chrysler Arena. Congratulations my friend!”

The John Stockton of the Jack Pine, The floor general of ‘84, The Man, Mr. Clutch, #20, JJ. These are just a few things that come to mind when thinking about the best Beaverton High School basketball player to ever put on that red and white uniform. Jeff Johnson, the only point guard to ever take the Beavers to the Michigan State Semi-Finals says it all. That doesn’t happen without being the ultimate competitor, team player, ball distributer and game manager this towns ever seen. Not to mention JJ could put the ball in the hole any time he wanted, he had one of those shots that as soon as the ball left his hand you knew it was good. And I was there to witness it all, a 4th grade little kid in the stands, screaming my guts out with the rest of the Bleacher Creatures, cheering on my favorite team and player.

Jeff Johnston is one of the most successful basketball players in Beaverton’s history.  He went on to have an outstanding college career and Michigan Tech. University.  Most importantly, after college, Jeff decided to come back to Beaverton and raise a family.  His support for Beaverton Rural Schools and the community is one of the reasons this is a great place to live. Congratulations Jeff!  It is well deserved.

It was a pleasure playing 3 years of basketball with Jeff. He was an unselfish teammate on the court always looking for the open man, for the better shot. Helping lead the team to a phenomenal season with many great memories.

I was 7 years old when our team went to Crisler Arena in 1984. I’ll never forget listening to that game with my family in my Grandparent’s basement. I remember hearing the name, Jeff Johnston, over and over and again. Even at 7 years old I figured this guy must be important! I’ve always thought it was cool that my first memory of Beaverton Basketball was the name, Jeff Johnston. Now, over 30 years later, it has been a privilege to get to know Jeff as a friend, and have the opportunity to coach all three of his boys. Jeff’s style of unselfish play, leadership and winning attitude set a standard of success in Beaverton Basketball that holds true today and is something I try to instill in my players as well.

Jeff was one of the best point guards in the state. He is a gifted athlete and a great leader. What set him apart is his intelligence. He was always the smartest player on the court.

Jeff Johnston moved up and down the basketball court with ease and grace!  He made the pass to his teammates many times that only he could see.  Jeff could out shoot just about anybody and was a terrific leader on the court.  He made his teams complete and very successful!

They were so much fun to watch.  Congratulations on your induction into the Beaverton HOF!

“Jeff was the first local player who made us believe small town kids could play college basketball. If we had a dream to play at the next level, Jeff was the roadmap that we knew we could follow, because not only did he play college ball, he was incredibly successful and left his mark on the GLIAC that is still talked about to this day. What is most admirable about Jeff is that he proved that anyone with a dream, passion and drive to be great can fulfill that dream. Jeff was often never the biggest or strongest player in the gym, but he was always the TOUGHEST. That toughness, both mentally and physically, is unparalleled and will never be forgotten. When Jeff entered the gym, you knew you were in for a “dog-fight” and that intangible quality, was contagious to his teammates and now to his own sons. It’s that mentality and mindset that took a small town on the ride of its life in 1984 that it will never forget!

Additionally, and maybe most importantly, Jeff truly models what being a man of character is and how to live your life selflessly. That foundation and those qualities have propelled him to great success on the court and in life. Those qualities made him a winner regardless of his endeavor. I am fortunate to know Jeff. The legacy he left as a player, father and person will always be one I will teach my own son. Congratulations on your Hall of Fame Induction, JJ and most importantly, thank you!”

“Practicing in the backyard as a kid growing up in Beaverton, you were always “Jeff Johnston” trying to beat those damn Kalamazoo Christian Comets in the Semis as the clock counted down to zero.”

“Glad that I could help with your assist total! 🙂  Really, Jeff, those were great years and I offer my congratulations.  Good Job….”