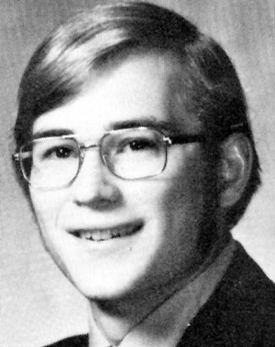 A multi-purpose running back who punished tacklers when they made contact and embarrassed them when they didn’t, his on-field bursts of speed and power drew the curtain on BHS’ golden era of football while his winning ways with teammates cast a glow that continues to burn today. An All-Stater and Golden Helmet recipient, he overcame serious injury to dominate on the gridiron and the track, removing all doubt that when he was on the field, the Beavers were never out of the fight.

What was it about the game of football that you loved so much?

What coaches did you learn from the most?

Mr. Faber taught us to be young men and he knew how to steer us in the right direction. I remember him taking the time to open the gym and help us lift weights. He would often make sure to ask us who we were hanging around with in order to surround ourselves with good people.

What are your thoughts on Coach Van?

He taught us how to play the game the right way. He taught us to win! Also, he taught us to hold our heads high when we lost. You always learn more from losing than you do from winning. He told us that it was an honor to play for Beaverton.

(Gladwin Coach Carl) Cheron told me one time that he knew Coach Van from their playing days in the Big Ten -Coach Van at Indiana, Coach Cheron at Michigan State. Upon the end of his playing days, Coach Cheron made his final decision to take the coaching position at Gladwin because Coach Van was at Beaverton.

This is funny - one time Coach told me, “Don’t ever do anything I don’t tell you to do." Then one time I changed the play at the line of scrimmage and scored a touchdown. Coach Van grabbed me with a smile and said, “From now on, don’t listen to anything I say!”

You enjoyed lots of individual success. What teammates helped bring out the best in you?

Bob and Dick Woodruff. They played with so much intensity that the whole team had to play the same way. I’ve never seen anyone play the game as hard as the Woodruff twins. Mike Wesley was another guy who could get you going. Mike was always so hyped up, it made you play hard.

I remember one game when Wesley was so excited to get a score. We all told him we got your back. He threw me a pass in the end zone and we beat Houghton Lake at the last second. That was the only time that Coach Van was carried off the field.

Who were some of the players from other teams who gave you headaches?

What are some of your favorite memories from your playing days?

I remember really enjoying watching Mike Loar and Dan Grant run the ball. I really learned a lot from those guys - they made me better when it was my turn to play. I played college ball at Ferris State with a lot of very gifted players, some that went on to the NFL. Dan Grant was better than every one of them!

Mike Loar was a man playing among boys. He just punished people. Mike would have guys hanging on him and still jump over people. Mike was also a gentleman. In a practice as a freshman, Coach Van told me to tackle those guys when they came around the end. It was Dan Grant who was following Mike Loar! Mike hit me so hard the next thing I remembered was waking up with someone picking me up by my pants. It was Loar. He smiled at me and said, “Good hit Bru!”

Another thing that I remember enjoying was Red “Right Tail Back at Two”. It was the play where I would follow the Woodys and Dan Presidio. We gained so many yards off of that play!

You and the Woodruffs have had a lifelong friendship.

I’ll never forget, from kindergarten on up the Woodruffs always made sure I was on their team. They have always had my back and I’ll always have theirs.

You also played at Ferris State, what are some of the things you remember about that experience?

It was more of a job than it was at home. It wasn’t quite as fun because if you weren’t doing your job, there was always someone right there to take it from you.

Your top 10 Beaverton Football Players of all time.

How has the game changed since your days?

This is why I don’t watch the game anymore. We used to work on repetition - by the end of the game, you were ahead of the game. The worst thing a kid can do these days is try to emulate what they see on TV.

Coaches aren’t allowed to make kids tough anymore - if you hurt anyone’s feelings, you get in trouble. I think that is why you see so many of the old school guys getting out of it.

What are you proudest moments of being from Beaverton?

Being inducted into this Hall of Fame - being placed next to people I look up to. Not so much as players, but as people in our community. I am proud to be who I am today because of who taught me those life lessons. The reason we play sports is to build character. Coach Van taught us to understand that what we do on the field will be remembered by all. It teaches you life lessons and how to handle success, as well as to deal with failure.

Our community has always been about family. Support has always been there. We learned as players from our coaches to play for Beaverton and be proud. We have always taken care of each other! Forty years goes by fast, but the people I played ball with are still the people I consider family.

What are your thoughts on your fellow HOF members?

Coach Van - Best coach I ever had. All Coach had to do was look at you and scare you to death.

Dan Grant - Best back to ever play in the JPC.

Mr. Metzger - One in a million. Did more for the community than anyone.

Larry Gerow -  Always there on the sidelines; great stories about how great he was.

Jeff Christian - I just remember going to a cross country meet and watching this kid cross the finish line, sit down, drink a glass of water and then watch the kid in second place finish!

Ken Govitz - Like all the Govitzes - they were all great players.

Joe Mishler - Made everybody better.

Jim Newman - I was young, but I remember hearing stories about how great his arm was.

Woodruff Twins - I’ve never seen two players who played harder and with more intensity and love for the game.

“Bru is just as much a brother as he is a friend – he has always had my back. As a teammate, he was always in shape and ready to go before the season. He made sure everyone else was too. He was 110% all the time and expected the whole team to do the same. Being the leader he was, he let the team know if he expected more. If a play didn’t work, he would have Wesley run the same thing again. Bru would put his hand on my back running down field and push me into the guy I was going to block as he sped off toward the goal line. He had a 360 spin move that he would do at the last second and leave a would be tackler empty handed. I remember feeling proud running from the end zone with Bru after blocking for his touchdowns. One time, after a 30-yard run, we turned to leave the end zone and there were yellow flags laying all over the ground. I said, “Who was the jerk that jumped the count?” Bru ran by me and said, “YOU!!” As a walk-on starter at Ferris State as a halfback, Bru was timed in the 60 yard dash against the fastest 3rd year half back. Bru beat him three straight times. In embarrassment, the halfback said he didn’t get a good start. The whole team laughed. On the road, Bru put a 6’6 defensive end on his back with a block for a game-winning touchdown. The coaches ran the tape back three or four times; the whole team stood and applauded. He always impressed me with his moves, speed and agility, and he punished potential tacklers with power. Talking football in Beaverton, Rick’s name is always in the topic. I can’t think of anyone else that deserves the honor of the Hall of Fame more. Congrats, Bru.”

“Rick Brubaker was my teammate, classmate and friend. Rick was on Varsity Football our sophomore year and as JVs we went 0-9. As seniors we were 6-3 with Rick on our team. This is proof that the best players are the ones that make everyone better.”

“Rick Brubaker is one of the best running backs that ever came out of Beaverton High. He didn’t just come to practice and play football, he came to make a family with his teammates and inspire them all to excel and have fun and make them winners. You could always count on Rick to have those long spectacular runs for touchdowns – in fact, he made them look easy. What makes me think of Rick as a great Hall of Fame caliber football player was the four-, five- and six-yard carries that he had to earn on his own. One time Rick had a conversation with a guy from another town about Beaverton football. When the guy found out where Rick lived, he said that a kid from Beaverton that graduated that year stole the chance that his son had to be the football player of the year. Rick said, “I know – I’m that kid.” My favorite play was the sweep right tailback plays when Rick would go around the right end. I was the right guard and the last lineman to go around the corner. Bru was always much faster than me and he was always yelling at me to go, go, go and my duty would usually end up with me being shoved where he wanted me to block. It was always music to my ears hearing his footsteps pounding down field for a big run with my face in the dirt. After the play, he would always swat me in the helmet and congratulate me with that Brubaker laugh and a “Good block, Woody”. We were immediately great friends and always will be, but he is very competitive and made it very clear to everyone that if you got in his way to the end zone, he would run you down, too. He was always a lot of fun to play with and was always in great shape. He could fake the jersey off of guys and streak down the field leaving everyone in awe. Rick is a very special person and comes from a great family. There are so many good things I can say about Bru, but the most important thing to me is that we are Beaverton Brothers and he is a GREAT friend. Love you Bru, and congratulations with the honor of being inducted into the Hall of Fame!”