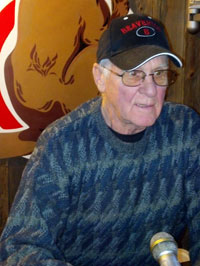 Forever known as The Voice of Beaverton Football, his gentle tones under the Friday night lights carried across the gridiron and well into the surrounding cornfields for more than thirty years. The Beavers’ first-ever public address announcer, the press box iron man was noted for treating players on both sides of the ball with fairness and respect from his perch above Metzger Field, sentiments that were reciprocated many times over from multiple generations of BHS fans, friends and foes.

What do you think when you hear the name of Coach Van?

I think of a hard working guy who made an honest attempt to be the best team leader he could be and what he instilled in people.

What drew you be an announcer?

Football was my favorite sport, and I wanted to continue to be around it and Mr. Metzger asked me if I wanted to do it, and I did. I started out on the sidelines on top of a ladder until we built the press boxes.

What do you think when you hear the name of Mr. Metzger?

I think he’s an archive, a legend.

What did you enjoy about announcing?

I really enjoyed the highlights of individual successes. And it wasn’t just Beaverton - when I witnessed another player that was impressive, I felt really good about them, like Standish or Gladwin or wherever.

What are your top three memories of announcing?

First was when Mike Loar was running a return kick, I think, and going east on the opposite sideline and literally ran right over two or three people without slowing down. It just boggled my mind how he concentrated and how good that guy was.

Another time, a person sitting below the booth (the mother of a player) and a player got into the play and helped make a tackle and I announced his name and the proud mother said, “It’s nice to know people in high places.” And we of course were the highest in the ball park.

I think another highlight was the opening of the new broadcast booth that so many people from the community put money and labor into, including Roger Milhisler. It was such a pleasure to have such a comfortable place to work. Also, the spotters who helped so much. Denny Ware was one guy that was so much help for so long. I would take the ball carrier and Denny would take the tackler and pass the info along to me instantly. We worked so well together; he’s a great guy.

Did you have any specific sayings?

I usually missed calling one game a year, which was a JV game when I’d go to Canada fishing. When I got back, I was told that they knew the voice of the Beaverton Beavers was gone. I’d hear that every year. I did both JV and Varsity every week, and missed one game a year during 34 years to fish.

I never tried to show partiality; I really never tried to raise my voice for Beaverton. I just wanted to remain neutral. The players didn’t deserve to come to our field and not be treated the same way.

Any good laughs you can recall?

We usually had one good laugh a game where I’d say a name wrong, and we’d get a kick out of it. It was usually the Pinconning and Standish names. Before every game, I’d go check lineups with coaches and pronounce them, but some of those Polish names were tough.

Any recollection of strange things happening?
The lights would go out now and again. One time during a halftime activity, the lights were turned off for the activity, and they didn’t come back on for 15 minutes after the second half was supposed to start. We didn’t do that again, but several times lights would go out on their own without our help.

Didn’t you also coach softball?
Yes, I coached JV and varsity softball. I worked with Bob Phillips, who was the JV coach, and then took the varsity after the coach quit, and did that for two years.

Your thoughts about being alumni of BHS?

I’m kind of partial with the wife Joann employed there for many years. It’s as good as it can be; I’m no different than others, I don’t think. I graduated here, worked here, and it’s a part of my life and I respect it. I thank the school for allowing me to be a part of the program for so many years.

Do you ever attend sporting events?

I always try to make at least one game early in the year in football and go into the bleachers and enjoy it and just reflect. I also try a game or two of basketball.

Mike Loar - he was just phenomenal. And I was so impressed with Dan Grant, Al Havens, Bob Mishler, Howard McKimmy... Eddy Baker, who was a quarterback one year. A small guy, but he was so good.  Later, Dan Grant was so gutsy for his size.  We’ve had some remarkable players over time.

“Sherm Fassett was THE voice of Beaverton football for many years. We could not have had a better P.A. man. He knew the game so well and all of the players. He could always inform the fans of less known aspects of the game and what was going on as they watched. He was a true and loyal Beavers backer. I’ve always enjoyed Sherm’s company and discussing sports with him. He is a long-time friend whom I value. He very much deserves to be in BHS Hall of Fame. Sherm has done a lot for BHS sports and I feel honored to be included with people like him in this recognition. Congratulations Sherm – you deserve this honor.”

“Sherm was a really nice guy to be around. We had some really good times in the press box. I would give him the tackle and he would do the runner or whoever caught the pass. I remember one game when the wind and rain was blowing so hard the windows in the press box were coming in on top of us. I stood up and held the windows and Sherm kept right on announcing. I’m sure glad it didn’t turn into a tornado because I don’t think he would have stopped until the game was over. Sherm always had a story to tell about the times he spent announcing the games and he has a lot of stories. Any time you would meet Sherm at the press box or on the street, he was always happy and upbeat. Even now when I see him, he is always busy doing something for his church or the many friends he has. Sherm Fassett is one of the ‘Good Guys,’ as they would say in the Old West.”