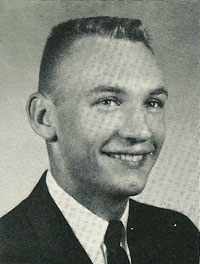 A three year varsity football player, he used his work ethic, tenacity and devotion to the game to achieve All Conference, All Area and All State Honorable Mention honors as a senior quarterback. His team-first approach served him as well on the court as his speed did on the track, earning him the All Sports award as a senior. A Purple Heart awardee for his sacrifices in service to his country in Vietnam, his love of sports continued as an adult as he served young people on and off the field for many years to follow.

Like many other players you played multiple sports. What were they and what positions did you play?

I played three years of varsity football, a halfback as a sophomore and quarterback as a junior and senior. I also played in the defensive backfield. I was a forward in basketball, and I ran the 100-yard, 220-yard, 440 relay and long jump in track. I did play baseball as a freshman.

Which sport was your favorite?

Oh, football was my favorite, obviously.

You had success in football. Which teammates helped you play your best?

Guys like Homer Warner, Junior Channels. And Terry Grove was a great center.

What players from other schools gave you the most headaches?

Gladwin boys were the worst. There was a Breault kid and Ted Redman I remember the most.

What was your approach to winning the Beaverton-Gladwin game?

Well, they were Class B, and we were Class C. They were always a little bit bigger than us. Our approach was to each play our positions as well as we could and just hit ‘em hard.

Since you’ve played high school sports what are the differences, if any, that you’ve noticed in high school athletics?

I don’t see the same desire to win as we had and I don’t think the kids are as tough as we were. We were a bunch of strong hardworking farm boys then.

Who was the coach you learned the most from and what did he teach you?

I learned so much from Coach Van Wieren. He taught us to work together as a team and be supportive and respectful to each other. He also taught us that we weren’t better than anyone else just because we were athletes and to treat everyone with respect wherever we were.

What are your three favorite memories from high school sports?

When we beat Gladwin, I intercepted a pass and ran it to the 2-yard line; then Homer Warner took it in for the score.  And there was a guy from Roscommon who was supposed to be the fastest guy in the conference and I beat him in a race during track season. And then I guess another favorite memory is just our football team. It was a strong team and our guys on the line were great to be around and play with.

What is your proudest Beaverton High School moment?

I would say getting the All Sports Award as a senior.

Any thoughts or memories of the other HOF members from your era?

Coach Van. He is just such a good person, a wonderful coach and mentor. I went and saw him inducted into the Michigan Coaches Hall of Fame a couple years ago. That was great to be there for him. And Jim Newman was my idol. He was a big, tall quarterback who could throw and run. He was the Johnny Unitas of our time  and I loved watching him play.

How does it feel to have your athletic accomplishments recognized by the HOF?

This is just great. I’m really thrilled. Beaverton is my home town. I have a lot of memories of growing up there and going to school and playing sports through the years. It’s really nice to know that I’m a part of Beaverton sports history and that I’m also part of such an honored group of Beaverton athletes.

“Murray is very deserving of this. He was a good leader on and off the field and he put his heart and soul into football. He was determined to be a good player and leader. He was also a good defensive player. We have been fortunate to have had a lot of good football players and Murray is up there with the best of them.”

Murray and I hung around together, got into trouble together. But Murray always put his whole heart into whatever he did, whether it was football or anything else. Always upbeat, even when we were down in points. Pushing us and saying, ‘Come on, we can do it.’”

“It was a good thing Murray was so good at sports because he wasn’t any good with the horses!”

“I only played football my senior year, but Murray was a good quarterback – he did his job in that position. I ran track with him for three years; we were on the 440-yard relay team together. We won most of our meets. Murray was pretty fast, a good teammate and fun to be around.”

“I was too young to have gone to any of Murray’s games, but I have heard the story from my older sisters of how Murray and his friends like Homer Warner and the Grove boys got to eat dinner before anyone else on game day and they were served steak for supper. How special was that?!”