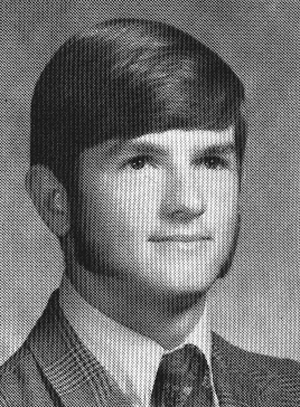 A two-way standout on one of the greatest BHS football teams ever, he delivered physical punishment in equal measure, be it at the line, downfield or in the opponent's backfield. Averaging 12 tackles per game in 1970, his tackling anchored a conference-winning defense and his blocking sprung record-setting rushes, earning him All State honors as a senior.

It's only reasonable to expect that Bob and Dick Woodruff should enter the Hall of Fame together - each of the twins was an outstanding athlete in his own right across multiple sports at BHS, but they rarely took to the field or court without the other. They continued their tag-teaming history by answering a few questions in our HOF Q & A with sometimes eerily similar responses. We're fairly confident it was Dick who answered these.

What was it about the game of football that you love so much?

It gave me a chance to let out all of my aggression. Back then you weren’t allowed to touch people in basketball, so in football you could hit people. The harder you hit, the better you were, and we were encouraged to hit as brutally as we could. It was a rough sport and I loved it!

Which teammates brought out the best in you?

My twin brother. I knew that every play, he was going to go 110 percent. We knew what each other was thinking before every play. We went over and over every scenario so there was no situation on the field that we weren’t ready for. We used code words and I knew his every move without talking.

I was honored to be chosen to the All-Time Beaverton Football Team. But I was fortunate to have blocked for guys like Dan Grant, Rick Brubaker, Jim Richardson and Stevie Brubaker, two of which ran for over a 1,000 yards apiece in back-to-back seasons. Backs like that would make anybody look good.

I remember Stevie Brubaker was a relentless outside linebacker who would come back to the huddle and get on my butt for letting a back outside containment. He was never afraid to slap you upside the helmet and give you some typical “Stevie” encouragement.

Also, Stan Witer, better known as Mr. Football, was a great blocker. One hundred fifty pounds soaking wet, but played like a 200-pounder. Dan Presidio was our offensive end - 6’3, 200 pounds. One of the smartest guys in school and one of the most relentless players to ever step foot on our field. We had a great team - Mike Wesley was a heck of a QB and Keith Wolfe was the biggest guy on our line and immovable.

You played in what is considered the Golden Era of Beaverton Football. Have you ever seen another that compares?

That is tough question for me to answer because there were a lot of great teams back then. We were lucky to have a lot of talent, good coaching and we were able to stay healthy and had the athletes to win. Let’s just say that Beaverton football used to be known for smashmount football. For as long as I can remember, I was proud of the Red and White, walking up and down the sidelines with my dad, watching guys like Walt Offenbecker, Harley Quillet, Larry Gerow, Kenny Govitz, the Mishlers, Groves, Brubakers and so on. That fueled the fire for me to live up to their expectations when I got on the field.

As a player, I remember old time players like Ken Govitz, Randy Morse and John Calhoun on the sidelines yelling at us to dig in and I did not want to let those guys down.

Who were the players from other teams that gave you headaches? How did you handle them?

The Shervin cousins from Rosco. They were big, strong, tough players that were tough to beat. John Biery from Gladwin. He was lightning fast and the Midland Daily News Back of the Year in 1973.

What are your Top 3 memories from your playing days?

I will never forget one day when Coach Van came down to our freshman practice and asked who wanted to try out for running back. I raised my hand because I wanted to be the next Mike Loar. So we lined up and when I got the ball and ran through the hole, I got drilled. Coach said, “Let’s try it again, but this time, give them a head fake.” So I hit the hole again, and Bobby Killian met me head on and took my head off! Coach Van said, “Woodruff, you’re a lineman.”

Fast-forward to my senior year, and still thinking I might still be able to run the ball. We had our opponents inside our 15-yard line with a big lead, and their QB was scrambling. He threw a lame duck right to me and I intercepted it. I thought, here’s my chance, and I took off running. In my mind, I was hooking and weaving, spinning off of guys for at least a 10-yard gain. Needless to say, when Monday came and we were watching game film, Coach and the rest of the guys had a lot of fun at my expense after rewinding it several times and playing it over and over. I soon found out that I only ran about three yards before getting creamed! Coach Van jokingly looked at me and said, “Woodruff, you’re still a lineman!”

Another great memory was being able to block for Rick Brubaker and Dan Grant. If you got those guys and inch, it was all they needed.

And playing with my brother. He always played 100 percent, played hurt and was always on my right shoulder on offense and defense. We were partners before birth as well as on the field.”

You played at Ferris State College. What can you say about that experience?

Definitely a higher level of play. Everybody was at least equal to your ability. We made the varsity as walk-ons our freshman year, and earned a spot as starters on special teams.

Who was the coach that taught you the most? What did he teach you?

I had a life coach in my father, who taught me to work hard and respect people. And Coach Van was a godsend. You could not ask for a better coach. I looked at him as being a man such as my Dad, but also as my football coach. There has been so much said about Coach and how much respect people have for him. I would have done anything he asked me to do. It was the way he lived his life - he treated people fair. He dished out discipline when you deserved it, and gave praise when you earned it. To this day, when I am in a difficult situation, I ask myself, “What would my Dad or Coach Van do?”

Who are your Top 10 BHS football players of all time?

How has the game changed from when you played?

There is better, high-tech equipment, and better training techniques. There aren’t as many kids participating anymore. Too many kids are trapped indoors and not outside playing the game.

What is your proudest moment as a player, fan or coach at BHS?

What are some thoughts that you have about your fellow Hall of Fame members?

Since I was a young boy, Beaverton Schools and Beaverton athletics have been an important part of my life. I remember all of my buddies talking and bragging about their favorite teams and athletic heroes, whether they be the Detroit Tigers, the Pistons or some other professional team or player. Sure, I am a fan of our Michigan teams such as the Lions, Red Wings and the Spartans, and I am glad to see when those particular teams have success.

However, they were never MY team; my team has always been and always will be the Big Red of the Beaverton Beavers! The reason I think I love the Beavers so much is because this is where MY heroes play ball. This is where, after a big win in 1987, a 6'9 Mike Simpson took the time to slap me five (I was then a sixth-grade kid who literally looked up to him) as he and the rest of the basketball team celebrated with Coach Roy in the old gym.

This is where I played ball, where me and my buddies tried to live up to legends from the past, champions from the past. And although we came up short, we came up short with all of Beaverton right there behind us. I love the Beavers because we get to play for, follow, and root for winners and leaders like Coach Van and Coach Roy. The Beavers are my team because they gave me the opportunity to coach past champions and future legends like Jake Oard and Ryan Longstreth in those unbelievable runs to Battle Creek, because great things happen to great people from Beaverton.

So today is extra-special to me because the Beavers have inducted three more people as legends into our Hall of Fame. Two of them are guys who happen to be my biggest heroes of all, my dad, Bob Woodruff, and my uncle, Dick Woodruff. These two guys are the real reason why I love the Beavers as much as I do, because they were the ones who instilled in me what it means to live and play and love the place you grew up.

They taught me to be proud of my team and to FIGHT for them if need be. They taught me that I will make many friends in life but none will be like those who were there from the start.

I, like many others in Beaverton, have heard thousands of “legendary” stories about the Woodruff twins, whether they were on the football field or other “extracurricular activities”. With that said, it makes me very proud to now see those stories validated and both of them recognized as official members of our Beaverton Beavers Athletic Hall of Fame.

Congratulations Dad and Uncle Dick, thanks for everything and I love you both. 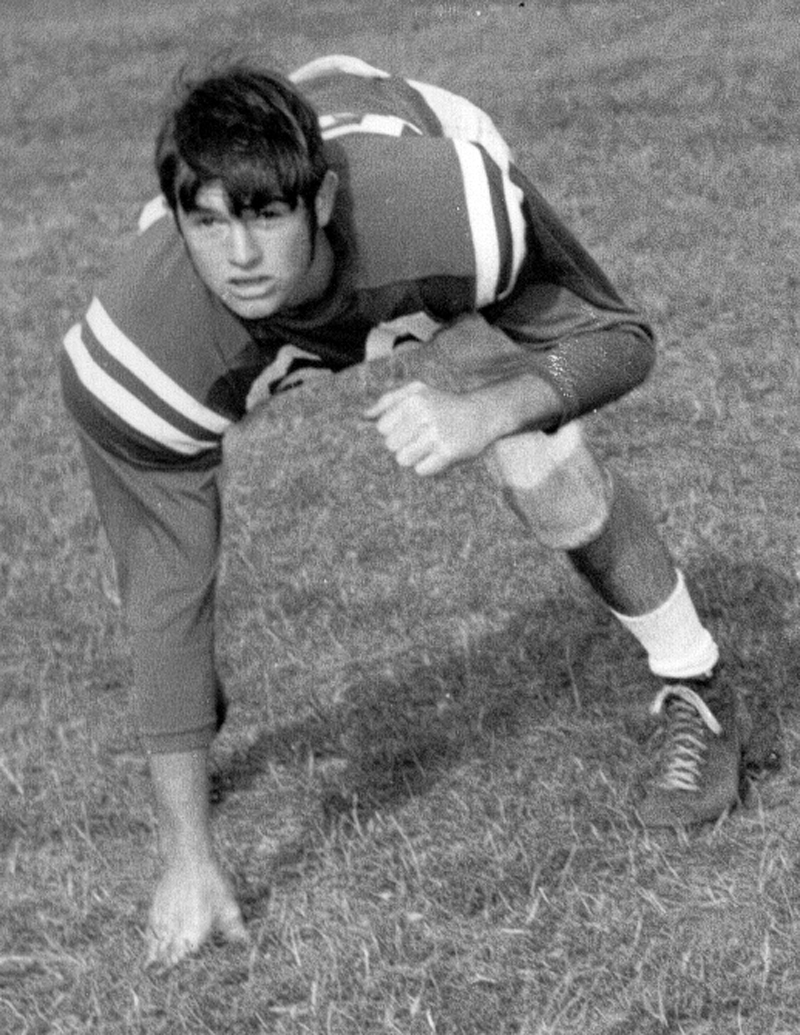 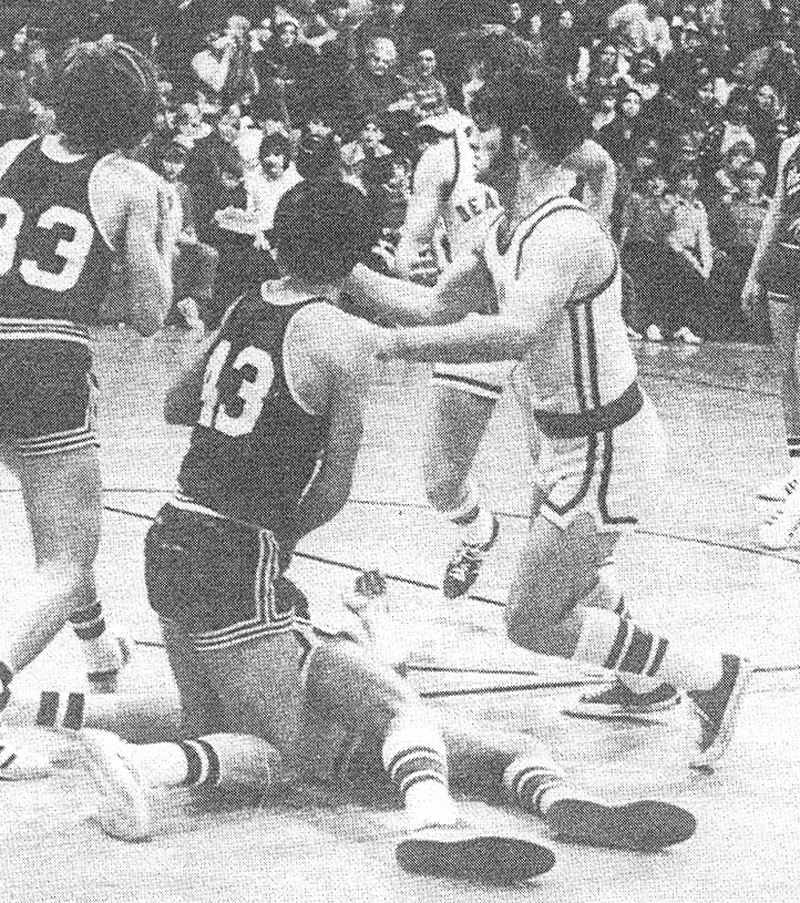 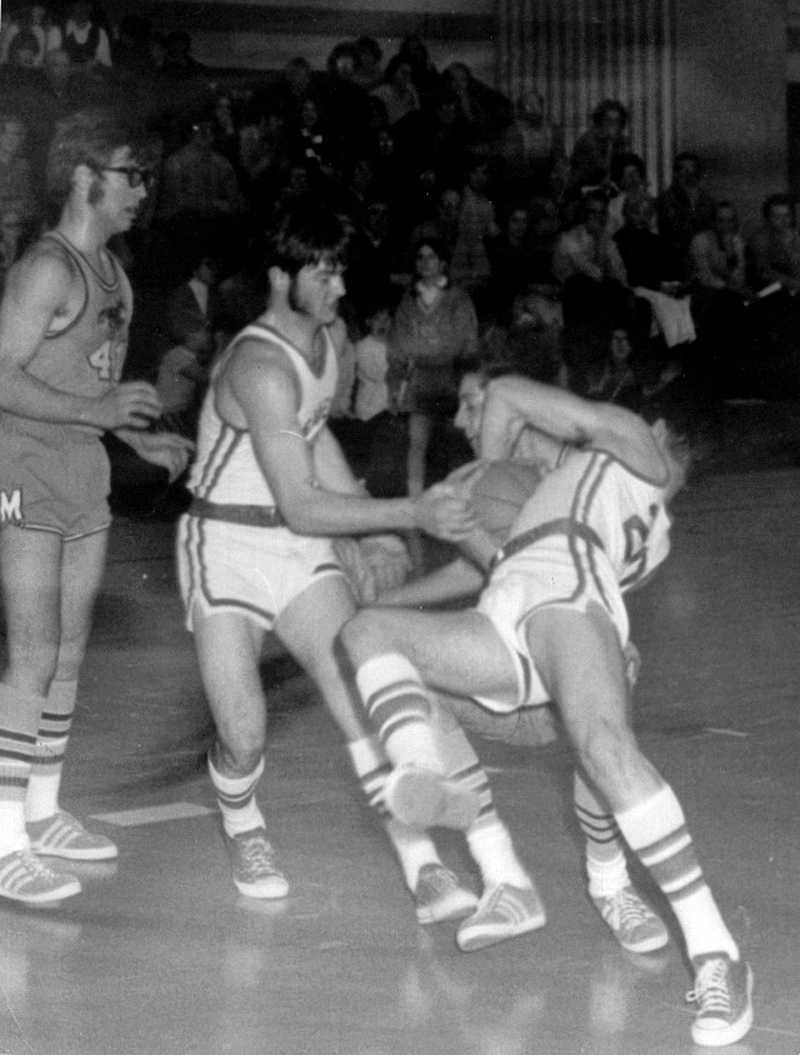 “I played sports with these guys for eight or nine years, and they were just tough competitors. They brought everybody on the team and made everybody around them better. They just played tough on the offensive and defensive line. They were great blockers, between the two of them, everything was taken care of.”

“Dick and I used to lie in bed at night coming up with code words that only we knew like ”Willy Wood,” or simple facial expressions, or the look in our eyes. Those things helped us so much because we knew each other so well. We knew what each other was thinking before it happened.”

“I played football with these two Hall of Famers for one year. It was a pleasure playing with two athletes that came to play day in and day out, not just at game time but on the practice field as well. When you play next to athletes like this, it brings out the best in all of the team. Congratulations go out to Bob and Dick on your induction into the Beaverton Hall of Fame.”